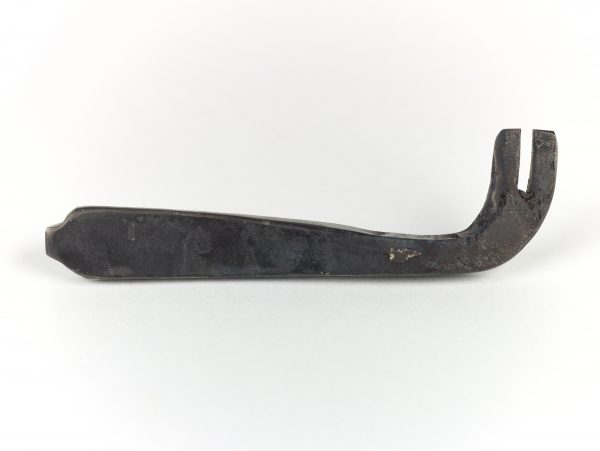 A reproduction iron key based on one from Repton, Derbyshire

Most keys that have been found are from graves, and were deliberately buried with individuals. The fact that only some people were buried with keys shows that keys had both practical and symbolic functions in the Viking Age.

The practical function of keys was to lock locks, as is to be expected. They secured items against access or theft, and their presence indicates that the owner of the key actually had valuables worth locking up. Viking Age keys, padlocks and locks have all been found by archaeologists. The locks and padlocks probably belonged to chests and were used to secure a person’s most important belongings. Chests were used as storage at home and as travelling luggage by sailors going abroad. The chest provided a secure place to keep personal belongings, and was also used as a seat for the rowers.

Keys could be decorated, like one from Gjerdal in Norway, which had been decorated with stylized animal heads and geometric ornamentation that dates it to the Viking Age. Keys are found as a part of burial paraphernalia in Scandinavia from the Migration Period through the Viking Age, and were usually made of iron or copper alloy. Although often viewed as primarily grave goods, in reality they have also been found on settlement sites throughout Scandinavia, and as single finds. Received wisdom states that they are most commonly found in women’s graves, and occasionally in men’s graves. However, they are not a common find overall. Only a small number of keys have been found compared to the large number of excavations undertaken. Most importantly, this applies to graves, where Berg (2015, 130) notes that of 6000-8000 graves excavated in south-east Norway only 117 contained keys. She also shows that keys are not a predominantly female accessory, as is usually stated.

The Museum of Cultural History in Oslo notes that approximately 75 copper alloy keys and 170 iron keys of Viking Age date have been found in south-east Norway alone. The copper alloy keys are all different, showing that they were not mass-produced, but rather cast individually. Moulds for keys and smiths’ tools have been found during the excavations at Kaupang in Norway, providing the key to understanding how keys were made.

Keys had symbolic value which has most often been taken to indicate the social function of the bearer. As items that provided access and closed it off, they indicated that the bearer had these powers too. This symbolic value has been most associated with women, largely because medieval law codes such as Borgartingslova (the Borgarthing Law) which dates from the twelfth or thirteenth century, identify keys ‘as a signifier for the key-bearer, sometimes described as a woman or housewife’ (Berg. 2015, 127). In the Eddic poem Þrymskviða Thor must dress up as Freyja. Part of his disguise is a set of keys hanging from his belt leading to the suggestion that Freyja may have been particularly associated with keys as a symbol of her domain. This image of powerful women controlling access to the house has led to an enduring image of the Viking Age matriarch wearing keys on her belt or hanging from a brooch to show that she was the gatekeeper in the household. However, this raises the question of what keys are doing in men’s graves, as in the case of Grave 541 at Repton, Derbyshire. Norse laws from the medieval period demonstrate that keys symbolised control over the household, a female area of power, and reinforce this idea. Given that keys symbolized power, ownership and control of access, it is likely that keys in men’s graves are indicators of their status as owners too. They may not have carried them in life, but keys as grave goods symbolise their power after death.

Beyond simple interpretations of keys indicating ownership, Pantmann (2014, 52) suggests that keys had a cultic role in pagan Scandinavia. The concept of the ‘kloge kone’ or ‘wise woman’ may have been symbolised by keys, because keys have a universal symbolic value indicating knowledge, power, and insight. In this role, they are associated with Freyja and thus childbirth, the afterlife (Freyja receives half of those slain in battle into her hall Sessrúmnir), and female leadership, a role that is closely associated with the role of matriarch of a household. Berg (2015, 127) notes that the connection between keys and childbirth is that the keys symbolically unlock the womb or loins to ensure a successful birth. Keys are also associated with Christianity. The triquetra found on some keys may be associated with the Holy Trinity, but may also be a pre-Christian symbol of fertility and motherhood (Berg, 128).

The focus on keys as symbols of women’s power is not supported by the archaeological evidence, so it is likely that keys are not symbolic of the housewife alone. However, it is noteworthy that decorated bronze keys are almost exclusively linked to women while iron keys are not (Aannestad. 2004, 80). The fact that keys were buried with certain people is a clear indicator of symbolic significance; the dead are buried with items that are important to them or to those that buried them. Those items gain significance by being chosen to be included as grave goods. Thus keys had symbolic significance, and it may have been related to power and access. This is supported by their rarity as finds, indicating that they belonged to the few, not to the many, and it is likely that those few were the ones who had wealth or treasures that needed locking away. Keys are symbols of wealth and access to power, and perhaps symbolise the ability to affect one’s environment through ritual action (Berg. 2015, 132), but their use as symbols is nuanced and may represent different things at different points in the Viking Age, and in different places within the Viking diaspora. As a result, unlocking the meaning of keys in the Viking Age is not simple.