by Cassidy Croci, University of Nottingham

Traders, raiders, and artists? When Vikings are conjured in the popular imagination they clasp swords rather than chisels, but many of the Viking Age objects found in the East Midlands demonstrate intricate craftsmanship that still survives after a thousand years.

Scandinavian art styles evolved throughout the Viking Age (c. 800-1100 AD) and are today classified into a loose chronology: Borre, Jelling, Mammen, Ringerike, and Urnes. These styles often overlap stylistically and chronologically, but there are enough distinctive features and recurring motifs to separate objects in various media into these identifiable styles.

These art styles further developed in the British Isles with some objects retaining pure ‘Viking’ ornament or featuring a hybrid Insular style that slightly modifies Scandinavian features to fit a new social and artistic context. This blog series will briefly explore the characteristics of the Scandinavian art styles appearing in the East Midlands through the objects themselves.

One of the earliest Viking art styles, the Borre style, was prevalent in Scandinavia from the the late ninth to the late tenth century. The style derives its name from group of bronze harness mounts discovered in a ship grave from Borre, Vestfold, Norway. The style is characterised by a range of geometric and zoomorphic motifs and the occasional gripping beast.

The Borre Style in the East Midlands

The Borre style came to England with the Scandinavian settlers from the late ninth century. The style proved to be popular amongst insular artists and appears on several forms of media such as stone sculpture and metal brooches throughout the British Isles. One object in the East Midlands that exemplifies the Borre style is a gilded, copper alloy equal armed-brooch fragment found in Harworth Bircotes, Nottinghamshire. There is a diagnostic Borre style beast with gripping arms and legs that has parallels with a find in Birka, Sweden. However, the gripping beast motif in England is quite rare as this brooch fragment is one of only six Scandinavian, Viking period equal-armed brooches recorded in England. 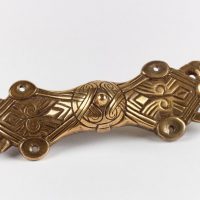 Another copper alloy, gilded disc brooch in the Borre style found in Cossington, Leicestershire was probably brought to England from Denmark. The interweaving tendrils on this disc are characteristic of the Borre style and recall interlacing loops formed from gripping beasts.  Scandinavian brooches tended to be domed with a hollow back compared to the English counterparts which were flat at the time. 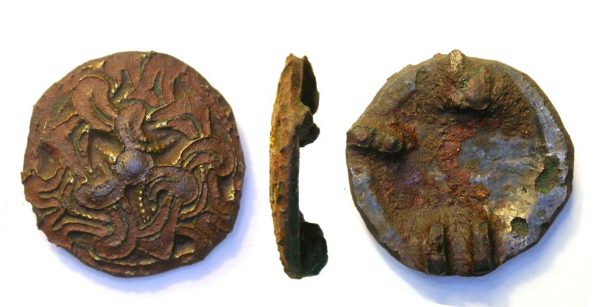 The Borre style is not restricted to brooches in the East Midlands, it is also found on other objects such as this copper-alloy strap-end found in Brookenby, Nottinghamshire. 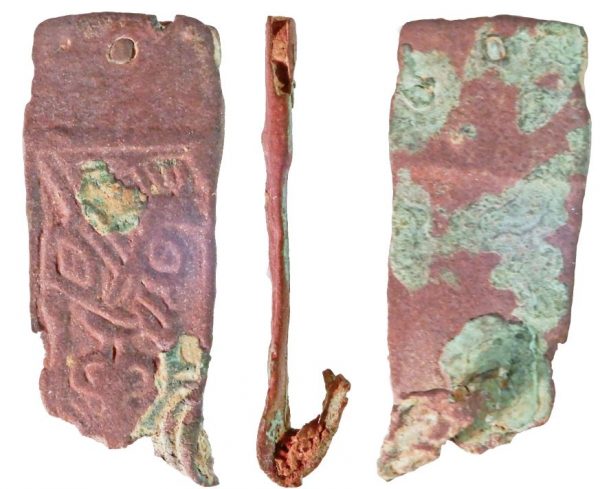 The style is also found on a few buckles in the East Midlands including the copper-alloy belt fragment pictured below which is thought to be from a flat buckle. The object was found near Coddington, Nottinghamshire, and has few comparable examples. Another copper-alloy buckle was found near Earl Shilton, Leistershire. This buckle consists of an oval loop with a circular cross section and has an elongated triangular pin rest in the form of an animal head. The animal head has a pointed snout, rounded head with rounded upwards pointing ears which merge into the buckle loop. 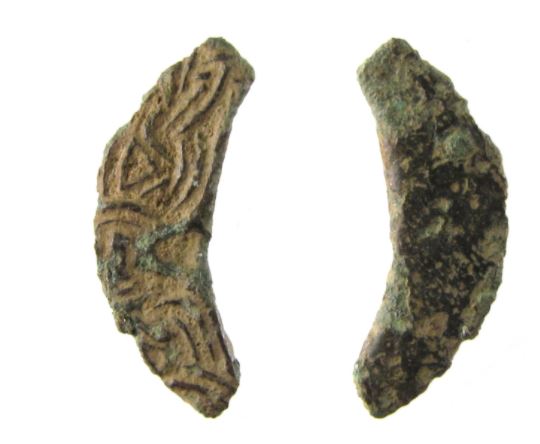 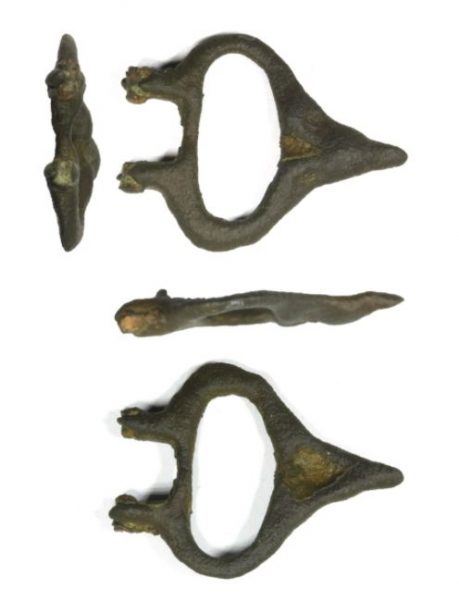 A copper-alloy belt buckle in the Borre style found near Earl Shilton, Leicestershire

All of these artefacts display the variety of isomorphic and geometric designs found within the Borre style and how this style was used to decorate different kinds of objects.

An instantly recognisable motif of the Borre style is the symmetrical, double contoured ring-chain. ‘This composition consists of a chain of interlacing circles, divided by transverse bars and overlaid by lozenges’ (Kershaw 2010, 2). Occasionally, the ring-chain terminates in an animal. The ring-chain appears in a modified ‘vertebral’ variant on stone sculptures in the British Isles where ‘a rib of truncated triangles’ is ‘flanked by side loops’ (Kershaw 2010, 2). The best-known example of the vertebral ring-chain is on the Gosforth Cross in Cumbria, but it is also found in the Isle of Man, Yorkshire, and even the East Midlands, engraved on a stone from St. Mary’s Church in Bakewell, Derbyshire. 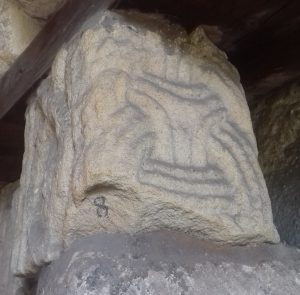