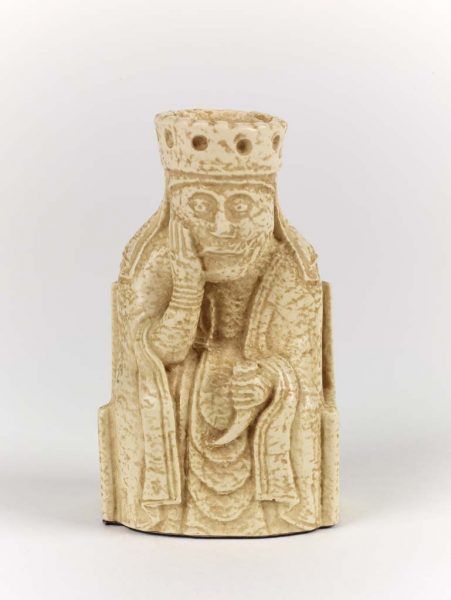 A reproduction of a queen for chess found on the Isle of Lewis, Outer Hebrides.

Jarl Rögnvaldr Kali Kolsson of Orkney composed a poem describing his nine skills in the first half of the twelfth century. These were all the skills that a member of the aristocracy in medieval Orkney and Scandinavia would have been expected to know, to be considered cultured and socially adept. Among these skills, he included board games (Old Norse tafl). It is possible that he meant chess, because chess was becoming fashionable in the courts of Europe at this time. However, Rögnvaldr could have been referring to any number of board games: Old Norse tafl refers to board games in general, rather than to one specific one. It is related to the Latin word tabula and the modern English word ‘table’. In its most general sense it refers to a flat surface, hence the board of a board game. The Old Norse word tafl is occasionally compounded with other words to specify more closely which game is meant; for example, Old Norse skáktafl means chess. Rögnvaldr lived shortly after the end of the Viking Age, but it is highly likely that the Vikings considered knowledge of these games to be an important part of a man’s social skills, as is suggested by episodes where they are depicted playing board games in the sagas, and the cultural context in which board games were played as recreation remained substantially the same from the Viking Age into the medieval period.

Hnefatafl (often called ‘King’s Table’ in English) is the board game most commonly associated with the Viking Age by modern people. It can be traced back to games played in Imperial Rome from at least the first century AD under the name Ludus latrunculorum (the game of the little thieves). These games were made popular throughout Europe under the Roman Empire. They were only replaced when chess arrived in Europe from India.

Hnefatafl is an asymmetric game where the defender has to try to move their king off the board while the attacker has to capture the king. Moves are made orthogonally in the same manner as a rook in chess. There are many variants of this game, using different sized grids but all have an odd number of rows so that the king may be placed in the central square. There are no detailed descriptions in Scandinavian sources that permit reconstruction of the rules. Instead the rules used now have been developed from the rules for Tablut which Carl Linnaeus wrote down in Latin in 1732. Linnaeus’ description of the game was based on his observations of how it was played among the Sámi. It is fortunate that he chose to visit the Sámi when he did, because Tablut was becoming less popular at that time; the younger people preferred card games to board games. There are gaps in the rules that Linnaeus recorded, and modern rules have been adapted to fill those gaps, and to balance the game. This has resulted in a number of variants of hnefatafl in use today. 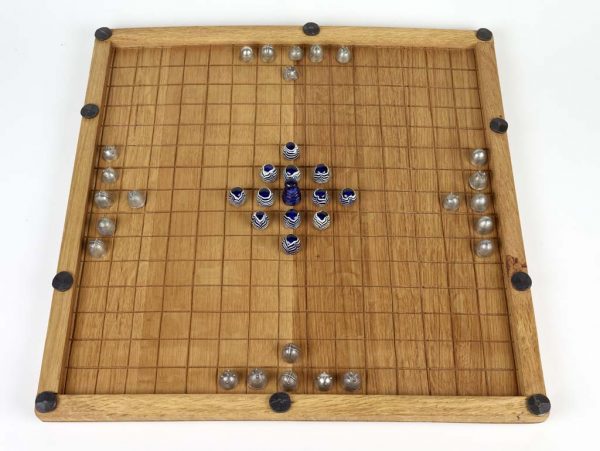 Hnefatafl is attested in written sources that are supported by archaeological evidence. Ragnars saga loðbrókar mentions that Sigurðr and Hvítserkr played it, and in Morkinskinna, one of the histories of the Norwegian kings, Sigurðr Jerusalem-farer, king of Norway from 1103-1130, boasts how much stronger he is than other men, but his brother Eysteinn immediately puts him down by saying “Yes, but I’m better at hnefatafl than you!” Gull-Þóris saga mentions that two women played hnefatafl, so it was obviously socially acceptable for women to play too. Of course, while hnefatafl was a pastime, it did not always end well. Þorbjörn Hook was playing halatafl, a variant of hnefatafl that used pieces with pegs in the base that could then be inserted into holes in the board, thus making it a perfect travel game. His stepmother thought this was not a good use of his time, so she grabbed one of the pieces and threw it in his face, gouging his eye out in the process so that it hung down on his cheek.

There is ample physical evidence for these games. Game boards of a type that Rögnvaldr would have known have been found in Viking Age boat burials like the Gokstad ship (c. 900) where a double-sided board was found. On one side it has a grid that may have been for hnefatafl while on the other is a grid for Nine Men’s Morris, another ancient game that was probably popularised throughout Europe under the Roman Empire. A fifteen by fifteen gridded board was found in the Coppergate excavations in Viking Age York, pointing to a variant of hnefatafl being played there. The Ballinderry gaming board with its drilled peg holes may be a board for a halatafl variant. The literary evidence also suggests that the defender’s pieces were usually red, while the attackers were white, although archaeological finds suggest a broader range of colours.

Dozens of playing pieces from Viking board games have been found on archaeological sites, including the Viking camps at Repton and Torksey in England, where invading Vikings presumably whiled away their time playing these board games. Some of these were on display in the Danelaw Saga exhibition at the University of Nottingham. The Portable Antiquities Scheme has also recorded a broad spread of gaming pieces throughout the Danelaw. These pieces are usually roughly conical in shape and could have been cast very quickly and easily in simple moulds. Gaming pieces could be made of glass, like some found at Birka in Sweden, amber, liked those from the Skamby ship burial, or of horn or antler. Some of the Lewis chess pieces may actually have served double function as tafl pieces too. Analysis of gaming pieces and their deposition in graves suggests that each person was not buried with enough gaming pieces to provide both sides in a tafl game. Instead, they could provide a force for the attacker on an 11×11 board, on average, or the defender on a board as large as 15×15 squares. This suggests that Vikings brought their own force to the table rather than one person providing both sides.

One final piece of evidence for board gaming is the depiction of two people playing a game and drinking horns of ale on a runestone (Gs 19) at Ockelbo in Sweden. The original stone has been destroyed but a replica stands on the spot now and shows clearly that the game board had the centre and the four corners marked to show where the hnefi or king stood at the start and where he had to escape to.

So, how did these games go down at parties? Óláfs saga helga (Chapters 152-53) in Heimskringla (pdf link) relates the tale of how one game played out at a feast at Roskilde in Denmark. Knútr the Great, king of England and Denmark, and he who tried to turn back the waves, was asked by his brother-in-law if he would like to play a board game. Knútr accepted but played badly. He was in a foul mood anyway, and got into a worse mood when Úlfr checked one of his pieces. He took his piece back, saying that he would make a different move instead. Úlfr got angry and tipped the board over, before storming out after they exchanged insults. The next morning, Knútr was getting dressed when he told his servant boy to go and kill Úlfr. The boy returned saying that Úlfr was in the church so he could not do it. Next Knútr told a Norwegian called Ívarr to kill Úlfr. Ivarr went into the church and ran Úlfr through with his sword. He returned to Knútr and told him the news. Heimskringla tells us that Knútr said to Ívarr “You have done well” but I prefer to imagine Knútr saying instead, “Checkmate!”

If you are interested in trying hnefatafl cheaply, Cyningstan has a number of print-and-play hnefatafl variants.