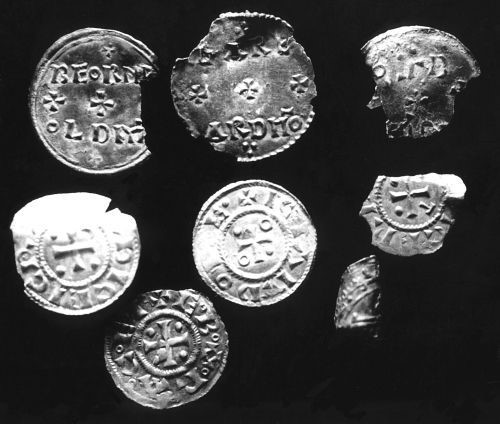 Working in a county that was part of the Danelaw and which had already revealed the small, but fabulously important Thurcaston hoard, found back in the 1990s (LEIC-C6D945), I was a little disappointed that in 13 years as a Finds Liaison Officer, I had only recorded one ‘Anglo-Viking’ coin. This was a ‘Cunnetti’ issue (895-902) of York, found in 2009 in Rearsby Parish (LEIC-B230B).

Everything changed in late in 2015 when I was shown a St Edmund memorial penny. These were minted in East Anglia by its Scandinavian rulers c. 895-910 AD. The coins feature the often blundered inscription ‘SC EDMUND’, a dedication to the saint who was, ironically, martyred by ‘Vikings’. I told the finder how rare his coin was and that he had made my year (see LEIC-19C0DA ). 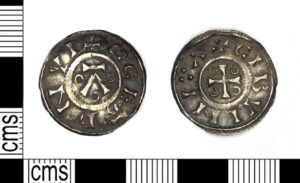 However, it seems that these coins are like buses and within weeks I was shown another (LEIC-B7F405). By April 2016 we had the hat trick, with a third being found in the same district as the first, all in North Leicestershire ( LEIC-4FC58C). A further two examples of this coin had been found prior to the inception of the Portable Antiquities Scheme. The first and the only ‘Anglo-Viking’ coin recorded for Leicestershire on the Early Medieval Corpus (EMC – managed by the Fitzwilliam Museum who also care for the Thurcaston hoard) was found near Wymeswold in 1987 (EMC 1987: 118). The only one found in the county so far by excavation turned up during the major ‘Shires’ excavation in Leicester city centre in 1988 (A39.1988). This alone is a very important find. As an ‘Anglo- Viking’ coin lost in an urban environment, it suggests that Scandinavian traders were present or, at least, that a Scandinavian lost a coin they were hoping to use as currency there. 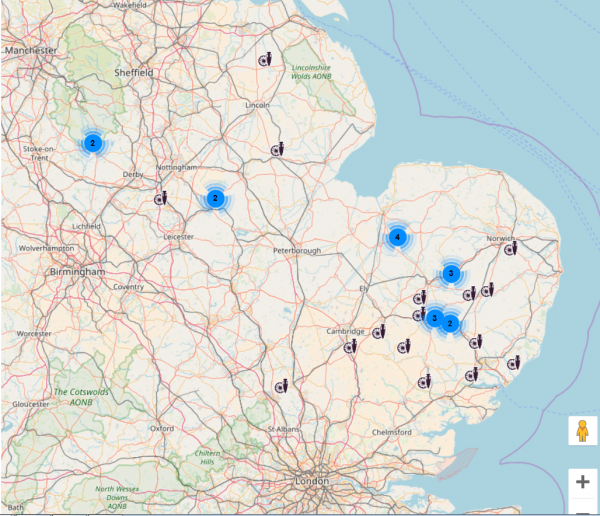 The St Edmund coins are very interesting for a number of reasons: firstly, they are not ‘legal’ tender in England,  so must have been circulating amongst Scandinavian settlers. Because of this their distribution may tell us something about the locations of such settlers and also which areas were Scandinavian enough to be producing these coins.   We don’t yet know  for certain where these coins were minted. The majority were lost (unsurprisingly) within East Anglia, so judging by their find spots, were minted in Bury St Edmunds (also named after the saint).  There are also examples now turning up in the East Midlands and the south east.  The numismatist Dr. Mark Blackburn thought that some were also minted in the East Midlands, as the coins vary slightly in design. Given their distribution Leicester, Derby or Nottingham are possibilities.  Nationally the PAS has recorded 37 (as of Sept 2018) and EMC has 95 (end 2017). Most were single finds from within the Danelaw, with the most northerly outlier being one in a hoard in Cumbria, and a few were found just outside the Danelaw in Oxfordshire and Staffordshire.

In addition to this ‘Anglo-Viking’ coinage, other forms of currency were circulating. The Scandinavians practised what we call a ‘mixed’ or ‘bullion’ economy where coins were valued for their weight in silver as well as their face value and ‘hacksilver’- cut up artefacts or chunks of bullion were also used as currency by weight.  This is why the Thurcaston hoard is important as it contains Anglo-Saxon, ‘Viking’ York and Arabic coin issues. The latter two were not legal currency, so could have only circulated as ‘bullion’. The hoard dates to 923-5 so it’s also good evidence for a mixed economy still being used by the local population at a time when the Danelaw was supposedly back under Anglo-Saxon control. 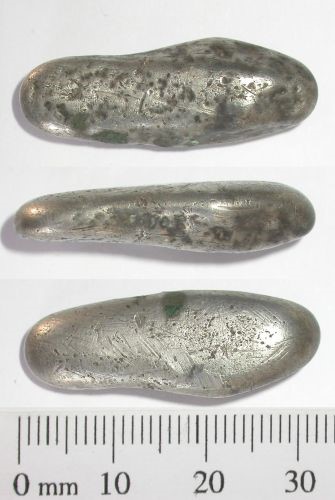 In Leicestershire we have a few examples of this economy, most notably two ‘cigar’ shaped silver ingots which were found near Breedon on the Hill (DENO-34FB88 DENO-CE6103) and which featured in the Danelaw Saga exhibition.   Nationally the PAS has recorded 163 of these ingots (136 are silver) with the largest concentrations coming from Lincolnshire, Norfolk, Suffolk, Yorkshire and Cumbria.

We have evidence for other foreign coinage probably used as bullion.  We have a silver Denier of Charles the Bald, Carolingian King of the West Franks, c.840-877, from Grimston, Melton (LEIC-9F7227). Only 8 of these have been recorded by the PAS nationally and they are thought to have circulated in fairly large numbers in eastern England in 9th and 10th century as a result of the Scandinavian presence. Even rarer is a copper alloy coin of Umayyad Syria, probably minted in Damascus and dating to the 8th century. This was found in a garden in Loughborough (LEIC-94D4D2). It’s just possible that such a coin was lost by a passing Scandinavian.

We also have a rare example of ‘pecking’ -a practice of testing the purity of silver by inserting a knife blade into a coins surface. A penny of Aethelred II from Syston (LEIC-01EB53) has been pecked all over both surfaces, suggesting it went through several ’Viking’ hands who wanted to check for themselves that the coin was indeed pure silver.

This currency, in its many forms, adds an important layer of evidence in a county that was in the Danelaw, but which has not yet yielded too much solid evidence for Scandinavian settlers.  They add much weight to the counties few artefacts and many place-names that reflect an Anglo-Scandinavian character, but whose reliability as evidence for settlers is hotly debated. These issues were only used in Leicestershire by people who accepted them, either for their bullion value or because they were Scandinavian issues.  So unless the illegal use of non-English currency was rife in the East Midlands, this currency points to a Scandinavian population.