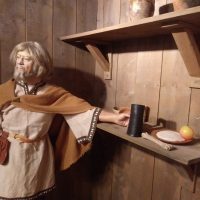 The Viking Age is clearly named after the Vikings, but who were they? Much scholarly ink has been spilled on what the word means and how best to use it. For a brief summary, see this separate blog post. On this website, we use the word as is common in contemporary academic usage for people of Scandinavian origin or with Scandinavian connections who were active in trading and settlement as well as piracy and raiding, both within and outside Scandinavia in the period 750-1100. The Viking Age was a large and complex phenomenon which went far beyond the purely military, and also absorbed people who were not originally of Scandinavian ethnicity. The word is thus inclusive of people of different origins and lifestyles, and speaking a variety of languages (many were of course multilingual), but they always have some kind of Scandinavian connection.

Similarly, we use the term Anglo-Saxon as a general term to refer to the people and communities who were the dominant culture in what is roughly the area of the modern country of England when the Vikings arrived, at a time before England existed. It is precisely the interactions of these two groups, the Vikings and the Anglo-Saxons, that this website explores and the terms make a useful distinction between the two groups, between whom there were otherwise many similarities: their languages were closely related and they had some aspects of their culture in common. One important difference between the two groups is that, at the time of the arrival of the Vikings, the Anglo-Saxons were thoroughly Christian, whereas the Vikings were not. However, as time went on, one of the changes that they underwent after migrating to England was a gradual conversion to Christianity, and this process can be observed in quite a lot of the evidence we present here.

We are aware that arguments have been made recently that the term ‘Anglo-Saxon’ is inappropriate because it has in modern times acquired racist connotations. We deplore any racist or white supremacist appropriations of the term ‘Anglo-Saxon’, or indeed ‘Viking’, and stress that we use these terms here as modern descriptors of historical phenomena and to make a useful distinction which cannot otherwise be made without further anachronism. Both of these descriptors refer to cultures that were multi-ethnic and multi-lingual, and which were well-connected to the rest of the world. However, there were distinct differences between them which were recognised at the time and which we must also recognise. The umbrella terms ‘Anglo-Saxon’ and ‘Viking’ seem to us sufficiently general and the most useful to help us understand these differences, but where more precise terms are appropriate, we use them.

The everyday  language of the overall group we call Anglo-Saxons is normally called Old English, which is an umbrella term for a variety of mutually comprehensible dialects. Old English is a member of the Germanic family of languages which includes the languages that later developed into German and Dutch, as well as English. The Germanic family also includes those languages that became Danish, Faroese, Icelandic, Norwegian and Swedish. In the Viking Age, there was little difference between these languages, and they are generally referred to as Old Norse, though sometimes we also use the term Scandinavian to distinguish them as a group from other languages. As well as surviving in place-names, this Scandinavian language also had a substantial influence on the English language as it developed into Middle and Modern English. Many words common in Present-Day English are derived from the Scandinavian language and were borrowed during the Viking Age.

In discussing both the material culture and the linguistic evidence on this website, we also use terms like Anglo-Scandinavian which is intended to suggest the kind of hybrid phenomena that evolved as a result of contacts between the two groups of peoples. We also use the term Viking for certain kinds of evidence which are characteristic of the Viking Age but perhaps not obviously Scandinavian. As the Vikings travelled and migrated, they often developed new cultural forms which are not evidenced in the Scandinavian homelands (a good example being the grave markers known as ‘hogbacks’) but are still clearly associated with them. Occasionally, if evidence such as an artefact or a name is particularly associated with one of the modern Scandinavian countries, we will label it as Danish, Norwegian or Swedish, and if it is obviously Scandinavian but not restricted to one region we will use that term. We also use labels like Arabic or Frankish for objects that originated in those parts of the world, but which reached the East Midlands as a result of Viking activity. 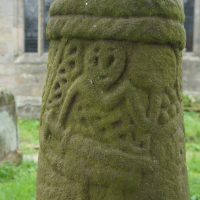 As today, people in the past had complex identities. Distinctions were made on the basis of gender, age and social status. People might also be identified according to a place or group of people or kin group to which they were connected, or on the basis of their religion, their role in society or their political allegiance. Nations as we know them today (England, Norway, etc.) were only just emerging in the early medieval period, so people were not commonly identified with these rather abstract entities, but they nevertheless had a good sense of geography and where people came from on a smaller scale. Many people were multilingual, but identities were also closely associated with their first or main language. Personal names might be indicators of someone’s linguistic and cultural identity, but such names can be misleading as some of them became popular across these boundaries. All of these complexities are hard to capture in the rather simplistic terms we have outlined above, but then we also know very little about how people thought about these things then. And finally, it is important to remember that people in the past were as varied as they are today. Individuals might follow the group in some things and not in others, and the groups were in any case constantly shifting. All we can do is see what patterns emerge from the evidence and generalise from those, which is what we have done with the terminology we use here, for the period when what we today call England emerged from this complex mix of peoples, cultures and languages.