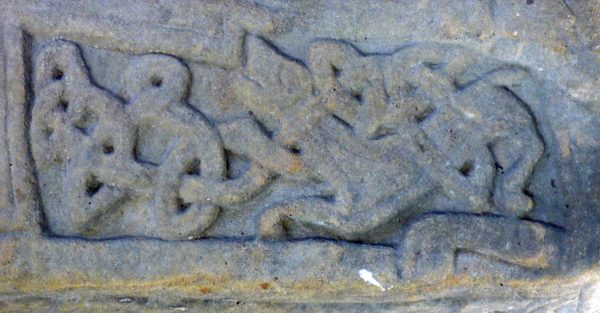 Detail of an Anglo-Scandinavian grave cover from Hickling, Nottinghamshire

This website explores a period in the history of the islands of Britain and Ireland which was characterised by contact with, incursions by, and then the settlement of, groups of people whose origins were ultimately in what are today the Scandinavian countries of Denmark, Norway and Sweden. We delight in showing some of the objects that these immigrants brought with them, as well as objects which were made here but to their taste or showing their influence on style and function. Other objects help us to track the places they visited and settled in, as does the less tangible evidence of language. The speech of the incomers is reflected in a wide range of names of the places the incomers settled in and which they named or renamed, or the personal names of individuals which are sometimes incorporated into those place-names. Some of this speech also survives in the present-day English language. All of this evidence not only records this early medieval episode of immigration, but most of it also demonstrates the ultimate integration of the incomers into the local community and in many cases the development of a hybrid culture. Yet other evidence in the form of stories and poems shows how communities of later periods looked back on this time which was no doubt fraught with both anxiety about change and excitement about new opportunities.

Defining these groups and communities, and thus the subject of this website, is in many ways tricky, but the attempt to do so can be very illuminating. Finding the right words to explain and explore these topics is in itself a part of the process of understanding the evidence and working out what was happening back then. These words and definitions may involve some terms that were known and used at the time, but most of the terms we use were devised in more recent times as part of this process of understanding. Some of the terms are quite vague and therefore inclusive but not very precise, others are more precise but could be wrong, as there is still much we do not know. This blog attempts to set out what we mean by the terms that we use on this website, while recognising that all of them could be defined somewhat differently, or that in some cases alternative terms might be better.

Our definition of the East Midlands is not exactly that as used in 21st-century Britain, but is rather based on the concept of the Five Boroughs. This was an area under the political control of the incomers as recorded in an Old English poem concerning events in 942, which names the Five Boroughs as Derby, Leicester, Lincoln, Nottingham and Stamford. Four of these later became the county towns of the historical counties of Derbyshire, Leicestershire, Lincolnshire and Nottinghamshire, which emerged as administrative divisions in the medieval period. This website is largely focused on these four counties, though with occasional glances both to neighbouring counties and to places further afield. Some county boundaries were reorganised in more modern times and we try to indicate this where relevant to help our readers orient themselves. 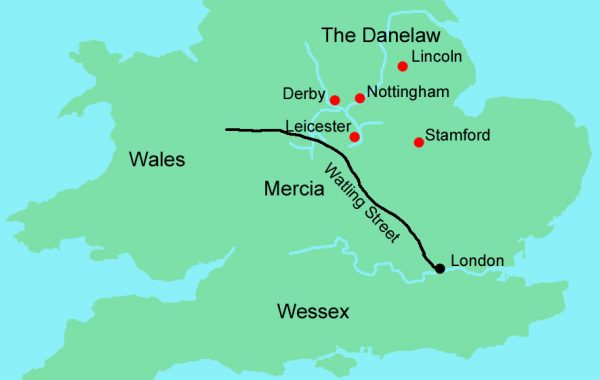 Map showing the line of Watling Street delineating the Danelaw

However we define the East Midlands, they are a part of an area known to scholars as the Danelaw, though what exactly they mean by it varies quite a lot. This term has been discussed in a separate blog post. It is used here in the general sense of ‘that part of England which was influenced by the activities of Scandinavians, whether they were the so-called ‘Great Heathen Army’ of the ninth century or peaceful settlers in the tenth’. The nature and extent of this ‘influence’ varied and that is precisely one of the things we explore in this virtual museum and our blogs.

Our chronological focus is on what we call the Viking Age, a period defined by the impact of the migrations of people of Scandinavian origin to other parts of the world. Scholars disagree over the exact dates to assign to this period, not least because there is variation in the evidence for this impact both chronologically and geographically. It seems easiest to operate with an inclusive date range and  there is some consensus for a generous definition of the Viking Age as 750-1100. Since the events of the Viking Age had in some cases long-lasting ramifications, some scholars also operate with a concept of the ‘long, broad Viking Age’ which extends until about 1500. This is useful when considering high medieval evidence such as the Icelandic sagas, or an English poem such as Havelok the Dane, which shed light on the Viking Age, even though they were composed in a later period. Such cultural phenomena reflect what some have called the ‘Viking diaspora’, a term which helps to explain the world created by the migrations of the Viking Age proper. The concept of diaspora draws attention to the continuing connections migrants have with their homelands and with migrants of the same origin in other regions, as well as their interactions with the peoples they encountered when migrating. This will be explained in more detail in a future blog post.