Mystery objects are always fun things to debate in archaeology. When something appears to buck the trends of any known design or type, and displays something unseen before, it offers a chance to re-examine items stashed in storage in museums, and maybe most importantly, our own sometimes stodgy thoughts!  My research speciality is equitation and equestrian equipment of late prehistory, as my doctoral thesis tried to make sense of Late Iron Age riders across northwest Europe. So many happy hours were spent buried in war booty tack from Denmark, Germany and the Baltic, piecing together the story of the horse in Ireland and Britain! More recently, I’ve been illustrating and cataloguing Viking-Irish bridle assemblages for Dr. B.G Scott, with particular attention to workshop variations on cheek pieces. So , with my horsie head on I have been dragged in to give my tuppence worth on the peculiar little mount recorded in the PAS scheme as LEIC-0A4CB4, and look at it from a very practical equestrian point of view, alongside an archaeological one.

Found in the Hinckley and Bosworth region of Leicestershire, the small copper alloy and gold mount is described as having “ a rectangular base from which three projections rise. Two are in the shape of animal heads on long necks; each has a mane along the neck made up of grooves, a raised collar at the top of the neck, large circular eyes, and rounded ears decorated with a triquetra. Underneath the chin, each head has a beard-like protrusion. The heads are decorated in the round, but the mane appears on one face only. The central projection is decorated on one face only. At the base is the upper part of a human face, with relief eyes, eyebrows, nose and moustache. Above is grooved interlace decoration which appears to be in the Borre style” (Geake 2004, 334)

Despite some past speculation that it may be part of a cheek piece for a bridle, the small attachments on the back (see Fig. 1) rule this theory out. A cheek-piece on the outside of a bit (not to be confused with the leather or fibre strapping which connects to the bit) fulfils the task of stopping a mouthpiece slipping in the horse’s mouth, making the bit ineffective as a means of control. As such, it needs to have certain features, such as a suitable aperture to feed the connecting strapping through to construct the actual bridle, and some evidence that it was large enough to integrate with the mouthpiece (see Fig. 2). 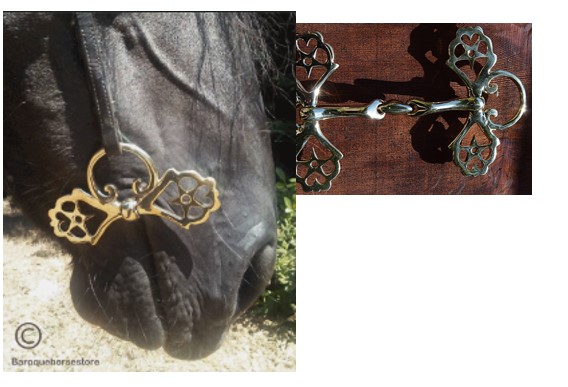 The aperture on this little artefact is too raw, irregular and small to allow this, although it could, possibly be a decoration from somewhere else on the bridle, potentially the brow band.  Based on finds from sites such as Balladoole, on the Isle of Man (Bersu and Wilson 1966), Navan, in Meath (Wilde 1861, 611) and some stuff found around Coleraine some time back, as well as the general archaeological record, I am inclined to feel that Scandinavian riders had rather good seats and rode well. Bridles tend to be functional, with straightforward single-jointed snaffles, rather than the bizarre and cruel bits often seen in the Roman world. Viking bits are often permutations on full cheek snaffles, and occasionally decorated with the exquisite dragonesque forms described by Pedersen (1996-97).

Just because I think you’d like to see one up close and personal, I’ve shown in Fig. 3 a specimen from The Hunt Museum in Limerick from my own research – they are delightful things, but as you can see, rather substantial, well in excess of 11 cm in length.

Fig. 3. A close-up of a dragonesque cheek-piece, from Hunt Museum, Limerick. Note the use wear at strap junctions.
Image (c) R Maguire

While the mysterious little Leicestershire object could be a decorative mount off anything, it does resemble the kind of decoration often present on Viking saddles.

For more on Viking saddles, see Part 2 of this article.

Wilde, W.R., 1861. A descriptive catalogue of the antiquities of animal materials and bronze in the museum of the Royal Irish Academy. Dublin: Hodges.