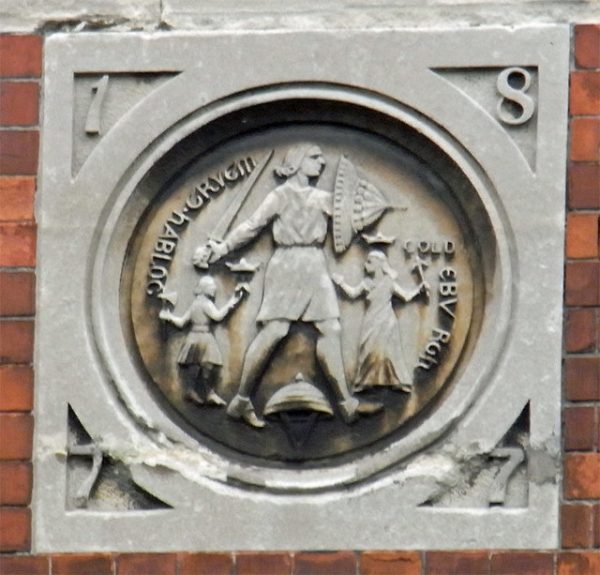 The Middle English romance Havelok the Dane was written around 1300 for a Lincolnshire audience still aware of its Viking heritage. It tells the story of Havelok, the son of the Danish king Birkabeyn, who as a small child is imprisoned after his father’s death along with his sisters. Their supposed guardian kills the sisters, but Havelok escapes through the help of a kindly peasant called Grim. This Grim eventually takes his whole family, including Havelok, to England, where he founds the settlement known as Grimsby. Havelok eventually marries an English princess called Goldboro and becomes king of all England.

Written from a later medieval perspective, the poem’s primary purpose is to celebrate the harmoniously dual Anglo-Saxon and Viking heritage of the English nation, and to acknowledge the full assimilation of the Danish-origin inhabitants into this nation. Havelok’s trajectory from prince to pauper and back again is a common romance motif and the story should not be taken too literally. But it does plug into local memories of the Danish migration to Lincolnshire. As an explanation for this migration, the tyranny of the Danish ruler presented in Havelok parallels the role of Harald Finehair in Norway, whose tyranny is presented in the Icelandic sagas as having been the main cause of the emigration to Iceland.

Even though Grim is a fictional character, the passage in the poem which explains how he arrived and how Grimsby came to be named after him has the ring of truth. It describes how he sailed into the Humber at the north end of the province of Lindsey. There he settled and built a small house. Because he owned the place, it took its name from him and has been called Grimsby ever since:

In Humber Grim bigan to lende,
In Lindeseye, riht at þe north ende.
Þer sat his ship up-on þe sond,
But Grim it drou up to þe lond;
And þere he made a litel cote
To him and to hise flote.
Bigan he þere for to erde,
A litel hus to maken of erþe,
So þat he wel þore were
Of here herboru herborwed þere;
And for þat Grim þat place auhte,
Þe stede of Grim þe name lauhte;
So þat Grimesbi it calle
He þat þer-of speken alle;
And so shulen men it callen ay,
Bituene þis and domesday.

The stone plaque shown above, which is derived from the thirteenth-century town seal of Grimsby, depicts Grim as a warrior in the middle, with the crowned figures of Havelok to the left and his bride Goldboro on the right.