By William Pidzamecky, PhD researcher at the University of Nottingham

In July 2018 a group of University of Nottingham students from the School of English went on an archaeological expedition to Vypovziv, Ukraine. The group was led by Dr Cat Jarman from the University of Bristol whose work on Viking camps at Repton has yielded spectacular results. As a result, Dr Jarman’s work with the Repton winter camp is particularly relevant to the project and allows sites such as Vypovziv to be compared more easily with its English counterparts. 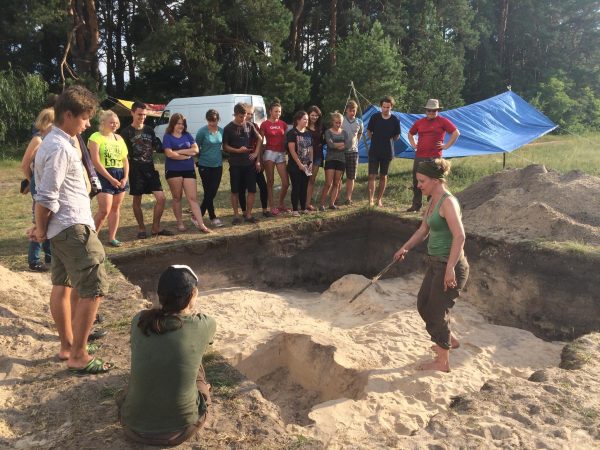 The village of Vypovziv is located two hours north of Chernihiv and is the site of a Viking Age Rus outpost. The outpost served as a control point along the Desna river route as well as a toll/re-supply station for travellers and merchants coming along the river to or from Kyiv during the later 9th through to the late 10th century. The Viking outpost is located on top of a tall ridge that stands out in the low marshy landscape and would have bisected the Desna River. The site included a fortified area with a palisade and a surrounding open settlement. The site included a fortified area with a palisade and a surrounding open settlement. Vypovziv, and sites like it, shares many similarities such as layout, location, and types of artefacts to winter camps in England such as Torksey and Repton, where Dr Cat Jarman is currently conducting archaeological fieldwork. Vypovziv, Repton, and Torksey all had some form of defence to protect them, were located in naturally strategic positions near rivers which provided easy access by boat, and at one stage in their lifespan became administrative and/or commercial centres. All three sites had a mixture of inhabitants, including women and children, and were specifically created by Scandinavian immigrants. The main difference between them is the initial motivation for their founding, Vypovziv was established as a point of control along a trade route while sites such as Repton and Torksey began life as a base for the Great Viking Army invading England.

The Nottingham team were given a previously unexcavated section within the boundaries of what would have been the settlement area of the outpost just down the ridge from the fortified area. The artefacts found ranged in date from the late 9th century to the 12th century and included tools such as needles and awls, imported and local glass beads, imported jewellery, and various pieces of pottery, one making its way from the Byzantine Empire. The last day produced perhaps the most interesting finds, two ovens demarcating two separate dwellings. The team looks forward to returning next July to continue their exciting work.

The expedition was made possible by funding secured by William Pidzamecky through the Cascade Grants Programme. The group joined the archaeological team from the University of Chernihiv, led by Dr Vyacheslav Skorohod, which has been excavating at the site for over a decade.