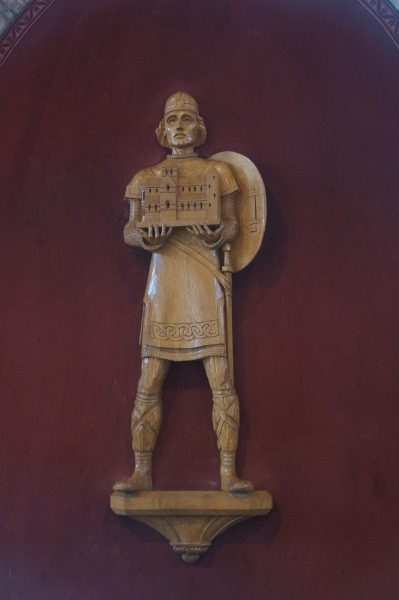 Grimsby is one of the few places in the East Midlands mentioned in an Icelandic saga. In Orkneyinga saga the Norwegian poet (and later Earl of Orkney) Rögnvaldr Kali Kolsson joins up at the age of fifteen with a group of Norwegian merchants for his first trip abroad. The date of this is uncertain, but it was probably around 1130. The saga says (ch. 59) that there were a lot of people there from Orkney, the Hebrides and from mainland Scotland. In Grimsby, according to the saga (and it’s the only saga that has this anecdote), Rögnvaldr meets an Irish-Hebridean called Gillikristr who claims his real name is Haraldr and that he is the son of the Norwegian king Magnús Barelegs. It’s a blind anecdote, since nothing comes of it, and Gillikristr is never mentioned again, but the two part on friendly terms.

The real reason for the anecdote in the saga is to introduce one of Rögnvaldr’s poems (ch. 60). He was an excellent poet – 32 of his stanzas survive and many of them are justly famous. Unfortunately, his poem on Grimsby does not present a flattering picture of the place, rather it expresses the poet’s delight to be heading back to Norway across the refreshing waves after five weeks in a muddy Grimsby (text and translation from Jesch 2009):

We have waded the mud-flats for five mightily grim weeks; there was no lack there of muck when we were in the middle of Grimsby. Now it is the case that mightily merrily we cause {the elk of the prow} [SHIP] to boom on the waves to Bergen across {the marshes of the gull} [SEA].

Although unflattering, the poem is probably accurate. The coastal landscape around Grimsby is characterised by both mud-flats and salt-marshes and the town itself was virtually an island with only one road into it at the end of the Middle Ages. The stanza appears to describe the Norwegians’ daily journey across the mud-flats to the town from their mooring-place in the haven during their five-week business trip. The sea-kenning mýrar môs ‘marshes of the gull’ is ironic since the sailors have left the marshes behind and the contrast is underlined by the two descriptors in megin- ‘mightily’, which contrast the grimness of their weeks in Grimsby with their pleasure at setting off for home.

Supported by the poem, the anecdote confirms that, even after the end of the Viking Age, the Scandinavian parts of England still had extensive contacts with other parts of the Viking diaspora, in this case merchants from Norway and Scotland.