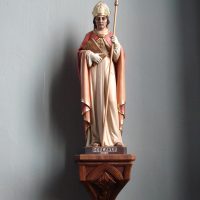 The first Icelander known to have studied in Lincoln was Þorlákr (Thorlak) Þórhallsson, bishop of Skálholt, South Iceland, from 1178 until his death in 1193. He studied abroad from c. 1153 – 1159, first in Paris and then in Lincoln. The reason he went to Lincoln is unknown. He may have met a master in Paris whom he followed to England. Another good reason might be that the cathedral school of Lincoln was well known at that time for the study of canonical law. He must have enjoyed his stay in Lincoln because his nephew, Páll Jónsson, followed in his footsteps and studied there as well.

All sources on Þorlákr are written in the vernacular (Old Icelandic) except for remnants of Latin texts written shortly after 1200. Three versions of Þorláks saga (The Saga of Thorlak) have been preserved. The oldest version of the Icelandic Þorláks saga was composed about the same time as the Latin texts. Þorláks saga describes the bishop as a pious man in a hagiographic fashion, but it also tells of his disputes with chieftains about church ownership and moral issues. To his dismay, one of the country’s most powerful chieftains kept Þorlákr’s sister as a concubine. Their son was the aforementioned Páll Jónsson who succeded Þorlákr as bishop of Skálholt. As bishop, he permitted people to invoke his uncle Þorlákr as a saint.

Þorlákr’s miracles were gathered and written down in a book, still preserved in a 13th-century manuscript. The original version of the miracle-book was read aloud at the Alþingi in Þingvellir, in 1199. Þorlákr seems to have been a popular saint until the reformation. Today, Icelanders mainly remember him because of his feast-day, December 23rd, the day when people are making their final preparations for Christmas. The day is still called Þorláksmessa, the Mass of St Þorlákr.

The Viking Society for Northern Research has a freely downloadable pdf translation of The Saga of Bishop Thorlak (Þorláks saga byskups) if you wish to read more about him.