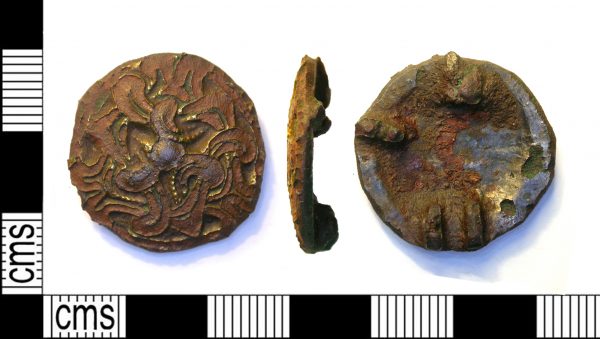 The two most important finds are ‘Viking’ disc brooches. A gilded Jelling-style brooch from Melton depicts two gripping beasts (LEIC-36241D) and will be loaned to Melton Carnegie Museum in the spring . The other is a disc brooch from Cossington (LEIC-E7A016) with pseudo-filigree gilding which is rare in such brooches. Dr Jane Kershaw has identified this brooch as probably Danish from the late ninth or early tenth century, i.e. from the period shortly after the Great Army arrived and the Danelaw was established.

There are three Anglo-Scandinavian Borre-style knot brooches from Leicestershire. These are made in a Scandinavian style but were manufactured in England. Their distribution, firmly within the Danelaw, suggests a ‘Scandinavian’ market for jewellery that reflected the styles of Scandinavia, hinting at nostalgia for the Scandinavian homeland and a desire to express Scandinavian identity. one was found just east of Melton (LEIC-782CD2), another at Goadby Marwood (LEIC-604DE5) and the last at Frisby on the Wreake (LEIC-CD4F45). This last place-name is interesting because it reflects the dominance of Old Norse in the area but points to the main settler there being Frisian and indicates that the Great Army was probably not purely Scandinavian.

Harness fittings and stirrup mounts make up about half the total and these are termed ‘Anglo-Scandinavian’. Some have direct Scandinavian parallels, some are thought to be locally made, influenced by settlement and possibly Cnut‘s reign. One rare type of stirrup mount, only found in eastern England occurs as a very rare pair from Peckleton, Leicestershire LEIC-8D1AC0 and LEIC-8C54F0. You can read more about these on the PAS blog. 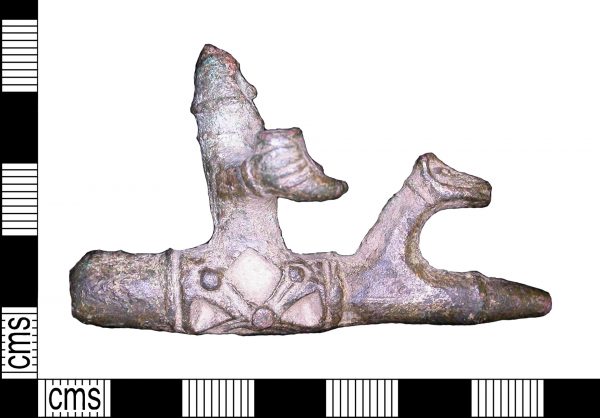 Lastly, we have two very rare and enigmatic objects. The first, a possible prick spur (LEIC-EEF651), from Loughborough among a small but significant scatter hinting at Scandinavian activity. It depicts a helmeted, drinking-horn-wielding man and has two parallels: both are from Germany, and it has been suggested the figure may be a Slavic God. How did it get to Loughborough? Given its suggested date range 900-1200, it could have arrived with a Scandinavian settler or it could have arrived later and be pure co-incidence it ended up near Scandinavian objects.

The other is even more of a mystery (LEIC-0A4CB4). It may be a cart fitting, but it has no known parallels. Its decoration screams Viking with its gilded interlace, moustached face mask and triskele-wearing bearded beasts heads. You can read further discussion about it in a guest post by Dr Rena Maguire on our blog. I am excited to report that the finder is probably going to donate this so that it can go on display.

These objects highlight the importance of recording with the Portable Antiquities Scheme. Each object is adding to a network of evidence that illuminates this period. They demonstrate the range of material culture that was popular in the Viking Age and point to enduring connections between the Danelaw and Scandinavia. The last two especially show that by recording a mystery we may eventually find a parallel and enhance our knowledge later.